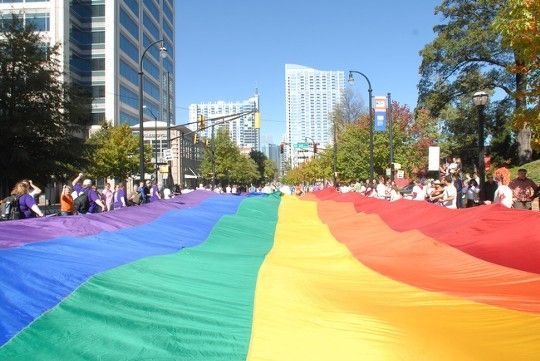 Well, I had loads of fun at Pride on Sunday. (Originally, I planned to make it out on Saturday and play guitar for a little bit, but it was all cold and rainy...so instead, I went Sunday for the parade.) I did end up giving out all of the sampler CDs that I made. Some people seemed pretty excited that I was just giving out my music to random people. Taking self-promotion to the streets, I called it. (Oh, and if you happened to get one of my CDs and that led you to this website, drop me a comment!)

Anyway, one of my favorite things about Pride is seeing parents supporting their gay daughters or sons, seeing churches that don't condemn people for their sexual orientation, seeing politicians who actually support the LGBT community. I just love seeing all of the acceptance, open love, and support.

I suppose the main reason that I go to Pride every year is because I don't see gender when I look at people. In fact, I don't really even believe in gender. I think there should be a word for that. Gender-free maybe? (Although I've only heard one other person use that. So maybe I should give this person credit? Though I'm not sure she coined the phrase? I'll get back to you on that. Haha.)  Sure, there is biology. There is such a thing as biological sex. But sex (like ethnicity) does not define anything about a person. I'm not saying everyone is completely alike, and there are no differences. But I think the main differences are individual and not based on biological sex, ethnicity, etc. It's a whole slew of things, really. Background, culture, family, genetics. Gender is a social construct. (So is race, really.) And when I look at a person, I don't want to see a black person, a white person, a man, a woman, I just want to see the person and get to know s/he for who s/he is, regardless of that person's sex, race, or biology. I realize that this is sometimes impossible, based on the way we as humans feel the need to classify and label things in our minds. Even our language is very "gendered." There is no gender-neutral pronoun, which makes us further have to put everyone in these strict categories. "Boy" or "girl." "He" or "she." I have some friends who use gender-neutral pronouns like "ze," "zir," "zirself," etc. I think that's an excellent idea, really. Maybe I'll start trying that.

And with that belief, I think that love happens without regard to sex, race, or biology, too. When I see a homosexual couple, I don't really even think to myself "oh, it's a gay couple." It's more like "Oh, it's a couple. Two people." I don't even necessarily like labels like "gay," "straight," "bisexual," etc., though I do understand why they might be necessary for some people. But basically, what I'm trying to say is, I go to Pride because I am proud to be gender-free.

First of all, I've had to push back the release of my debut solo album, Unsent Letters, but only by two weeks. And now, it coincides with the CD release show, too! So I have a lot of cool things coming up:

-Monday, October 26th - 10:00 AM - KSU Radio - I will be on Amie Flanagan's show on KSU Owl Radio, talking about my upcoming CD release and playing a few tunes. So tune in! You can listen at http://ksuradio.com

-Friday, December 18th - 11:00 PM - CD release show at Smith's Olde Bar in the Atlanta Room - 8 dollars - 21+ - I'll be playing a solo/acoustic set and selling copies of my CD! You also get the special price of 5 dollars if you buy a copy at the CD release show. 5 bucks! What a bargain!

Hope to see all of you at the show!