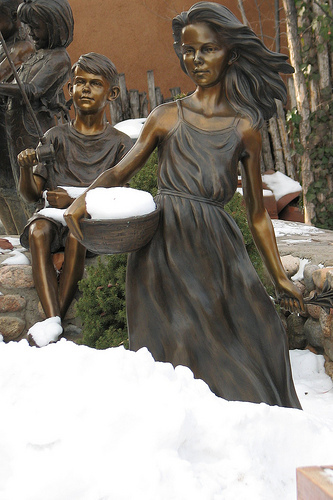 Hey everyone! First of all, Thanks for listening to my podcast! I got a lot of positive feedback on it so I'm definitely going to try to do more of those in the upcoming year. I'm thinking more podcasts in the whole "mix CD" format. They'll probably just be essentially me sharing awesome music with everyone.

Secondly, I hope everyone had a wonderful holiday season, and I hope 2010 is treating you well so far. I rang in the New Year having an awesome time jamming out to the Sealions at the Highland Inn, and I am really looking forward to everything this year has in store.

1. I'll be playing a lot of open mic nights, solo shows, and shows with my band, Long Absent Friends. I already have two solo shows lined up and two band shows.
2. THE 7TH HARRY POTTER MOVIE IS COMING OUT. (That's right.)
3. I'll be writing a play for the Horizon Theatre Apprentice Company to perform this spring.
4. New albums from Arcade Fire, Beach House, Massive Attack, the list goes on!
5. Due to my little brother being awesome, I will be going to see MUSE and the SILVERSUN PICKUPS in February!
6. My poetry book, Coiled and Swallowed, will be published from VergoGray Press sometime this summer or fall.
7. The final season of Lost. Maybe all of our questions will finally be answered.
8. I have gotten a book called The Daily Writer with writing exercises for every day. I've been doing them every day so far, and I really love them. It gives me a chance to stretch my writing muscles for a little bit every day.
9. I'll be starting graduate school with University of New Orleans Low Residency program (MFA in Playwriting) and traveling to Mexico for my first semester this summer!
10. Did I mention THE 7TH HARRY POTTER MOVIE?


There are a lot of things coming up in January in the Atlanta area that are worth checking out. So, let's get started.

My Events
In the Atlanta area...


THEATRE:
Here are some cool shows that I'm hoping to check out.

That's all I have so far. Feel free to add comments to the blog if I left anything out!